An economic environment that remained difficult and was characterized by a reluctance to invest continued to pose major challenges to the segment in 2021. As in the previous reporting period, extensive internal structural adjustments were necessary in view of the limited order backlog. There were a number of bright spots, however – the FB one fineblanking presses are being used by customers and continue to be met with considerable interest from the market. Significant progress was made in the development of production-ready metallic bipolar plates for fuel cells and in research collaborations. The outlook for the future remains optimistic. 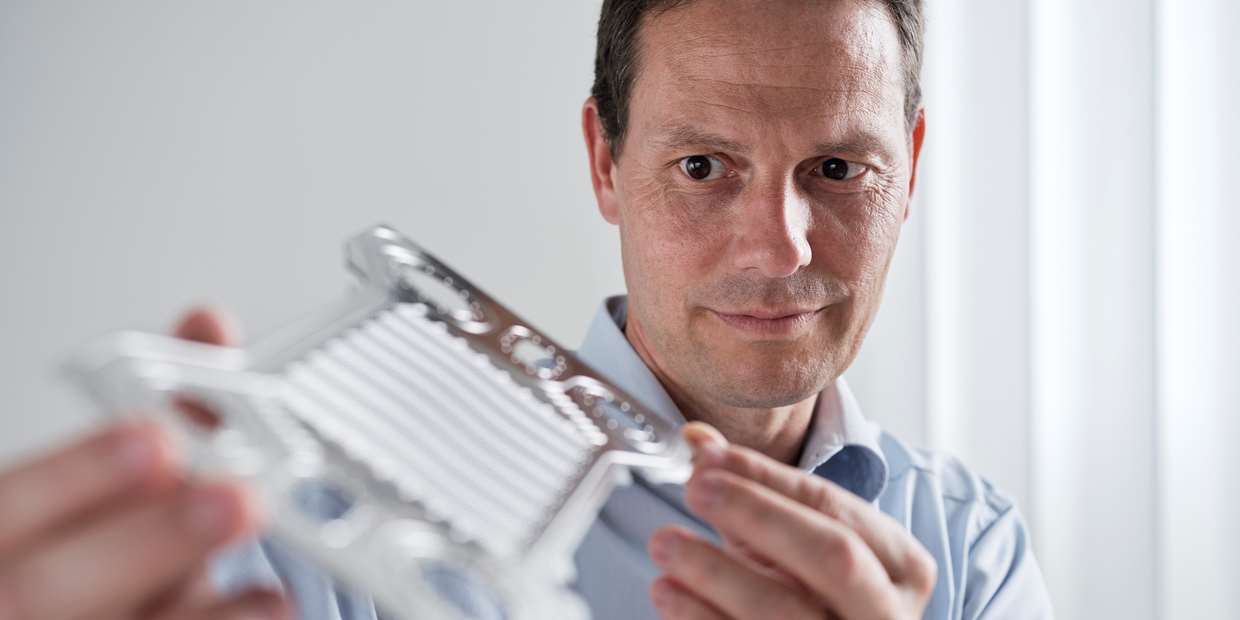 Orders received by Fineblanking Technology were slightly higher than in the same period last year, which was characterized by investment restraint due to the pandemic. In response to the sustained below-average business performance, the segment continued to make use of short-time work schedules as a tool to cut costs. In view of the precarious situation, the company was also unable to avoid implementing staffing measures to achieve targeted cost reductions.

In addition, the broad-based reorganization measures included streamlining and optimizing processes and intensively pushing ahead with the automation and digitization of business processes. For example, a newly implemented business intelligence tool supports rapidly reporting the segment’s financial data. Sales and project management processes were also further digitized. Orders are processed jointly with the customer via our online portal, resulting in greater efficiency, transparency, and customer satisfaction.

Major advances in the manufacture of metallic bipolar plates

The company has completed the development of FEINforming as a cutting-edge high-volume production process for metallic bipolar plates used in fuel cells. As a result, Feintool is offering its customers access to an economical production process for mobile and stationary fuel-cell systems. Close collaboration between the two segments made it possible to execute and deliver the first customer orders in China and Europe. The FB one press series has been modularized for this purpose and can therefore be configured for the production of bipolar plates.

FB one: sales pick up

The latest generation of presses from Feintool, the FB one, established itself as a high-end system for fineblanking over the course of the year. Various presses were sold and delivered to customers. At the end of the reporting period, several lines were being used in production in Italy, the Netherlands, Scandinavia, and Switzerland. It is worth noting that these are regions that have either not invested in new equipment for some time or have only done so extremely conservatively – an encouraging sign of what the future might hold. As was also demonstrated at Blechexpo in Stuttgart, there is significant interest in FB one, although we are still seeing some reluctance to make investment decisions. Meanwhile, customers have confirmed that the FB one regularly exceeds their expectations in terms of energy consumption, performance, and flexibility. Across the entire press range, the segment received a very encouraging number of new orders, especially in the last three months of the year, which allowed Fineblanking Technology to start the new year with a significantly improved order backlog.

The first edition of the Feintool Technology Forum was held in April. The digital event series focused on Feintool’s latest FB one press series. Up to 150 participants each from Europe, Asia, and the United States attended the three-part event, which provided in-depth insights into the FB one itself and also showcased some of the latest options available for removal systems built directly into the press. In addition, we explained in detail how FEINmonitoring and Feintool’s Smart Maintenance can be used to optimize system availability and maintenance.

The positive feedback and the number of participants have made a continuation of the Technology Forum inevitable. The second webinar at the beginning of October focused on the FB one’s key indicators from the customer’s point of view. The FB one fully reflects the paradigm shift in manufacturing toward systematic sustainability through a longer product life and the efficient use of resources, as the press takes energy efficiency and environmental compatibility to an entirely new level, as confirmed by an FB one customer in a video interview during the webinar.

Developing new products and processes and improving existing ones is an integral part of the growth strategy of the Fineblanking Technology segment and the Feintool Group as a whole. Research and development activities are geared toward supporting Feintool’s position as a technology leader in press and tool making over the long term. When it comes to the development of application-oriented technologies, the focus is on innovative projects that are carried out in close collaboration with universities of applied science, institutes, and industry partners. During the 2021 financial year, resources were mainly deployed in the following research and development projects:

Within the framework of Arbeitskreis Feinschneiden, a development consortium of research institutes, companies, and experts in the field of fineblanking founded by RWTH Aachen University’s Laboratory for Machine Tools and Production Engineering (WZL), the “Wear Protection Project” was successfully completed in the fall. A holistic analysis of the interactions between the substrate material, surface modification, coating, and lubricant identified considerable development potential that could significantly increase regrind life. A basic research partnership based on the project results is planned in order to further develop the application of high-hardness stamp materials.

The “Thermofineblanking Project” conducted in collaboration with ETH Zurich aimed to expand the range of materials that can be used in fineblanking by selectively exploiting temperature effects. This project was also completed successfully and is now at the industrialization stage. Over the coming years, the focus will be on commercializing the research results, with profitability at the center of our considerations.

Altogether, research and development expenses in the reporting period totaled CHF 4.5 million, which is approximately the same as in the previous year.

Fineblanking Technology made progress with its strategy of generating more orders outside the automotive sector, particularly in the luxury watch segment. The segment sold several T200 orbital cold-forming presses. The high level of customer satisfaction reinforces our decision to continue offering this admittedly niche technology in the future.

The modernization of existing systems in the fineblanking market is becoming increasingly important. As a side effect of the crisis and the uncertainties in the market with respect to the transformation to e-mobility, demand for used or overhauled presses is increasing. The segment responded to this development by reorganizing and strengthening the Overhaul unit, which specializes in overhauling and repairing existing fineblanking presses on the market.

In light of the shift to e-mobility, Fineblanking Technology is also opening up a new parts world that offers the segment new potential, such as copper components in the high-voltage range found in a battery-electric vehicle. The first orders were completed in close collaboration with the System Parts segment, and further orders are currently being processed.

Progress on all fronts

Despite all the challenges ahead, the outlook for the future remains upbeat. The Fineblanking Technology segment has unique global expertise and, thanks to its exceptional innovative strength, will continue to operate as a competitive technology leader in the market in the future. By continuously focusing its business on the electric-powered future – be it in the battery-electric sector or in the fuel-cell sector – and by systematically expanding its customer base, Fineblanking Technology will resume its growth trajectory.