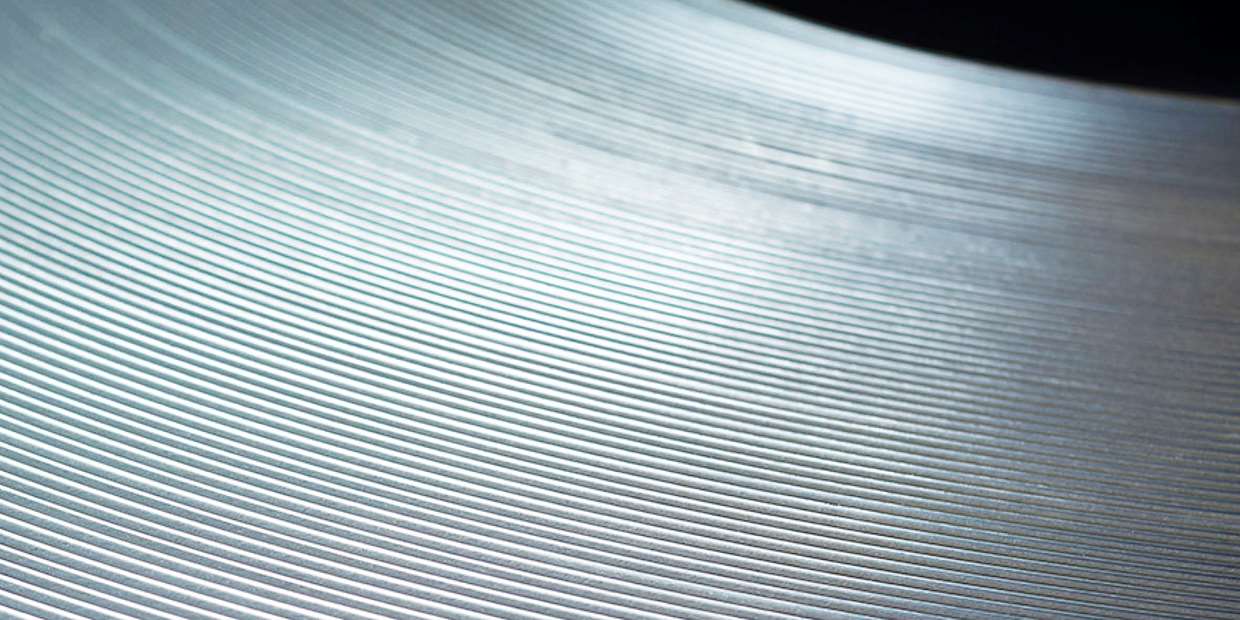 IMPORTANT KEY FIGURES AT A GLANCE

(business units with ongoing operations only)

1) In the 2020 financial year, Feintool received a loan of USD 8.4 million under the PPP program in the United States to mitigate the impact of the COVID-19 pandemic. In the first half of 2021, the government assured the company that this loan would not have to be repaid. Feintool also received CHF 3.9 million (amount excl. tax effect) in immediate aid from the Swiss government in the year 2021 to mitigate the effects of the COVID-19 pandemic. In addition, due to capacities no longer required at one plant, the company recognized an impairment loss on manufacturing equipment totaling CHF 12.1 million (amount excl. tax effect). In this overview, EBITDA, EBIT, the group result, the profit margin, and earnings per share are presented without these effects.

2) In the 2020 financial year, the company agreed to a change in benefits in the Swiss pension plan and a curtailment due to the staff reduction measures, which had a positive one-off effect of CHF 6.3 million on comprehensive income for the period in accordance with IAS 19 (amount excl. tax effect). In addition, due to capacities no longer required at two plants, an impairment loss on manufacturing equipment totaling CHF 5.9 million was recognized (amount excl. tax effect). In this overview, EBITDA, EBIT, the group result, the profit margin, and earnings per share are presented without these effects.

3) Board of Directors' proposal 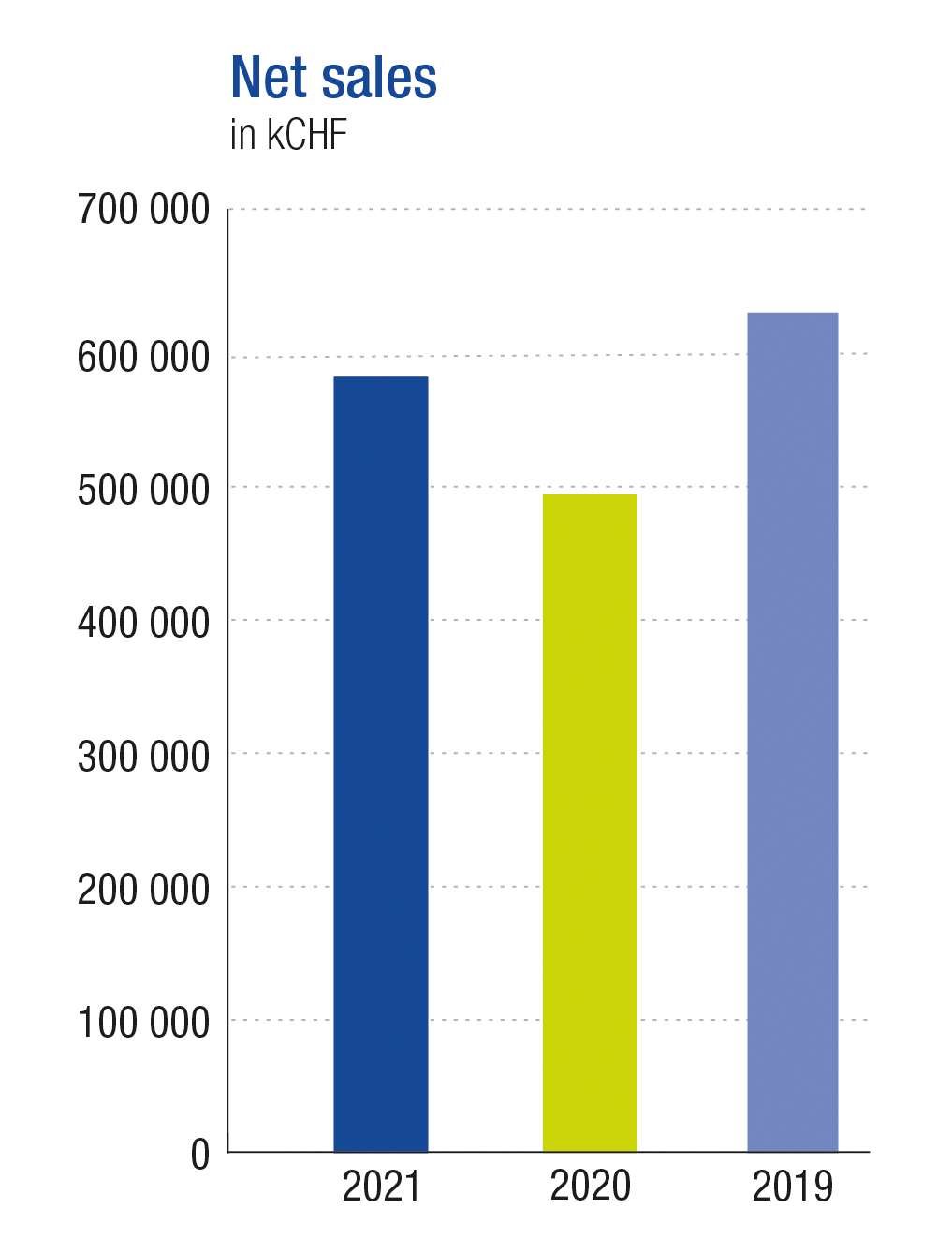 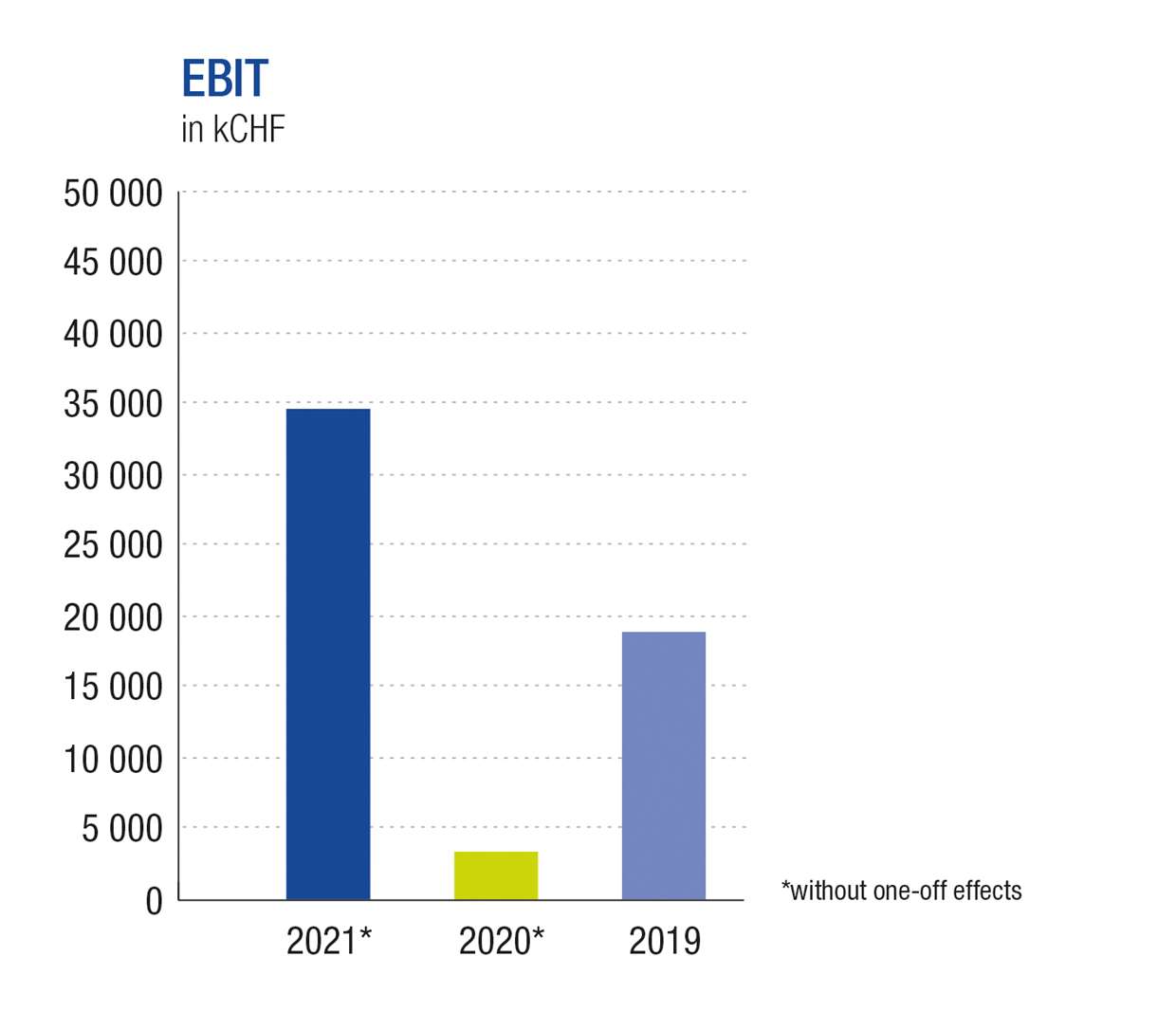 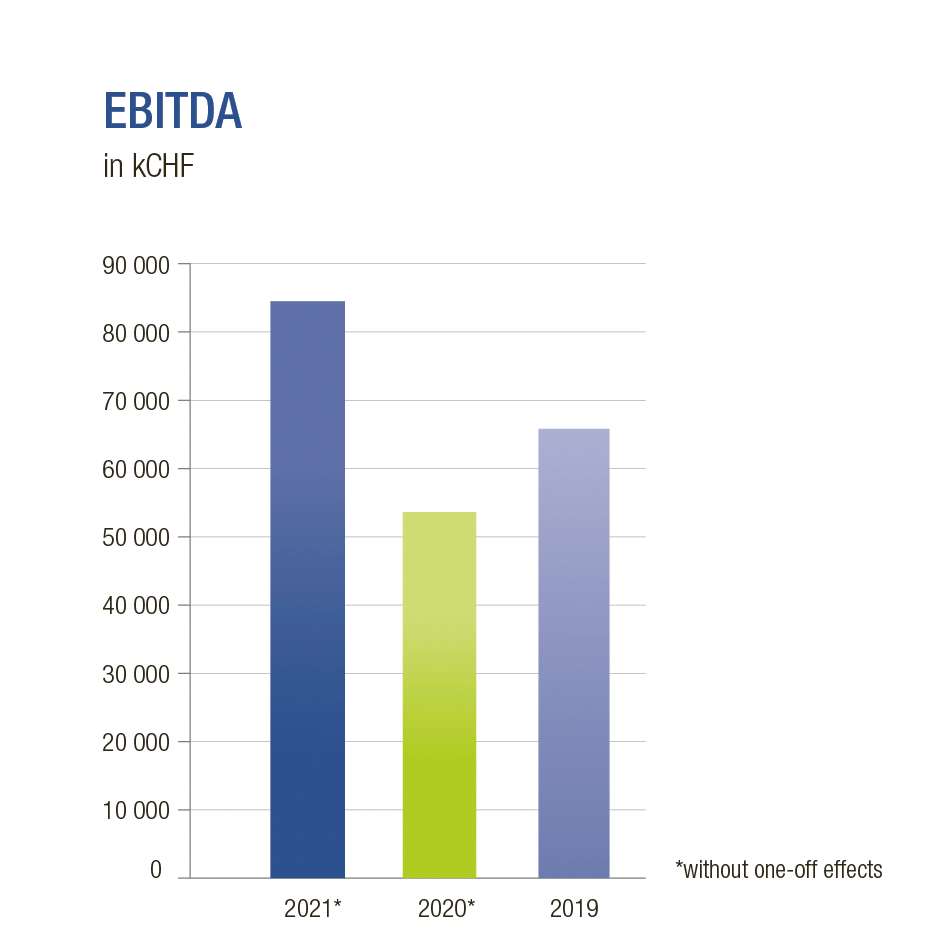 The consolidated financial statements for 2021 apply to Feintool International Holding AG and its subsidiaries. They cover the period January 1 to December 31, 2021.

In 2020, Feintool received a loan of USD 8.4 million under the PPP program in the United States to mitigate the impact of the COVID-19 pandemic. In the first half of 2021, the government assured the company that this loan would not have to be repaid. This resulted in other operating income of CHF 7.6 million.

In Switzerland, Feintool submitted two applications for emergency aid for COVID-19 hardship cases in 2021. The Canton of Bern’s Office of Economic Affairs approved these applications and Feintool received a credit of CHF 3.9 million in total. This amount is also reported in other operating income.

Feintool has begun implementing its Strategy 2030. A key element of this strategy is for the company to capitalize on the rapid growth of battery-electric vehicles. In this context, Feintool conducted an audit to assess the value of its manufacturing equipment. In the process, systems were identified which, as expected, can no longer be fully utilized due to the company’s transformation. This led to impairment losses on manufacturing equipment totaling CHF 12.1 million in the System Parts segment in Europe.

The order backlog increased by 56.0 % to CHF 16.8 million (previous year: CHF 10.7 million). The current order backlog is insufficient and represents a workload of approximately three to four months.

Expected releases in the high-volume parts segment over the next six months total CHF 307.8 million (previous year: 253.1 million). This represents a year-over-year increase of 21.6 %. Since customers can adjust or even completely cancel their releases under certain conditions, this indicator is not particularly reliable in times of extreme volatility.

Consolidated sales rose in the reporting currency by 19.5 % to CHF 588.1 million (previous year CHF 492.0 million). Half of the growth was due to an increase in volume while the other half of the increase came from higher material prices and, consequently, higher sales prices. During the reporting year, currency effects had a negative impact of CHF 0.2 million, equal to 0.1 %. As a result, Feintool recorded an increase in net sales of 19.6 % expressed in local currency. The System Parts segment generated 94.4 % of third-party sales (previous year: 93.6 %), while Feinblanking Technology was responsible for 5.6 % (previous year: 6.4 %).

Net sales generated by the Fineblanking Technology segment decreased to CHF 37.7 million (previous year: CHF 44.2 million). The translation effects of foreign currencies are negligible in the capital goods segment. Intra-group sales with the System Parts segment decreased by CHF 4.9 million, resulting in a share of 13.1 % (previous year: 28.5 %) in percentage terms. Sales to third-party customers increased by 3.7 % to CHF 32.7 million.

Material is by far the largest cost component for Feintool, whereby material costs also include costs for external processing of parts such as tempering or coating. In the reporting year, the material-to-sales ratio decreased from 44.2 % to 43.4 % – taking changes in inventories into account – and the cost of materials totaled CHF 255.4 million (previous year: CHF 217.5 million).

The reporting year was marked by a sharp increase in steel prices. Owing to price escalation clauses in many customer contracts and intensive negotiations, Feintool was able to pass on most of these fluctuations to its customers.

In the System Parts segment, labor costs increased by CHF 23.2 million to CHF 154.9 million. The ratio of labor costs to sales fell from 29.1 % to 27.7 % in the reporting period. Efficiency improvements, particularly at the newer plants in China and at the Oelsnitz plant, had a significant positive impact. The construction of a new plant in the Czech Republic continues to have a disproportionate impact on labor costs.

In the Fineblanking Technology segment, labor costs increased by CHF 0.4 million to CHF 16.2 million (previous year: CHF 16.6 million). As a percentage of net sales, labor costs increased significantly from 37.5 % to 43.0 %. The sales decline is the main reason for this increase. In this technology-driven segment, making labor costs more flexible continues to be a challenge despite the utilization of short-time work schedules. In addition, Feintool intensified its R&D activities, particularly with regard to the production of metallic bipolar plates for fuel cells.

Other operating expenses rose by CHF 4.6 million to CHF 71.2 million. As a percentage of sales, however, the ratio fell slightly to 12.1 % (previous year: 13.5 %). Many components of operating expenses, such as lease payments or IT expenses, do not vary substantially in relation to sales. Other operating income rose sharply to CHF 13.4 million (previous year: CHF 1.3 million). Other operating income includes two one-off effects. Feintool USA received a loan of CHF 7.6 million under the PPP program that it now no longer has to repay. In addition, Feintool Technologie AG in Switzerland received CHF 3.9 million in emergency aid.

Operating earnings before interest, taxes, depreciation, and amortization (EBITDA) increased significantly by CHF 32.4 million to CHF 85.5 million in the reporting year (previous year: CHF 53.2 million). At 14.5 %, the operating EBITDA margin in the financial year was significantly higher than in the previous year (10.8 %). There were three main reasons for this significant increase. Firstly, volume growth led to better capacity utilization at the plants and thus to increased profitability. Secondly, the company was able to achieve further operational process improvements. And thirdly, Feintool was able to benefit from passing on higher steel prices to customers, often at the same time. As a result, existing raw material inventories were reflected in the cost of materials at lower prices. Taking positive one-off effects of CHF 11.6 million into account, operating earnings before interest, taxes, depreciation, and amortization (EBITDA) totaled CHF 97.1 million, corresponding to an EBITDA margin of 16.5 %.

Earnings before interest and taxes (EBIT)

Operating earnings generated by the System Parts segment rose by CHF 29.5 million to CHF 53.8 million (previous year: CHF 16.7 million). As a result, the EBIT margin in the parts business improved to 8.3 % (previous year: 3.6 %).

The Fineblanking Technology segment, which continues to suffer from companies’ lack of willingness to invest in the fineblanking sector, posted an operating loss (EBIT) of CHF 4.3 million (previous year: loss of CHF 4.9 million). Research expenses were similar to the previous year, coming in at CHF 4.5 million.

Activities in this area will continue unchanged – as an investment in the future – despite the difficult environment.

The nonoperating units produced costs of CHF 9.6 million (previous year: CHF 9.0 million). The increase comes mainly from the costs of auditing and preparing for the acquisition of Kienle + Spiess GmbH.

The net financial result of CHF -4.6 million decreased slightly compared to the previous year (CHF -5.3 million). Adjusted for currency effects, the negative net financial result increased by CHF 0.9 million to CHF -5.7 million (previous year: CHF -4.8 million). With net debt remaining similar on average, interest expenses increased significantly due to the temporary suspension of covenants on the syndicated loan. The high volatility in various currencies led to currency gains of CHF 1.1 million in the reporting year (previous year: currency loss of 0.5 million). As a result, net debt at the end of the financial year stood at CHF 120.7 million, CHF 26.2 million lower than at the end of the previous year (CHF 146.9 million).

The Feintool companies’ overall tax expense totaled CHF 10.1 million. On the one hand, many Feintool companies achieved solid results, which led to a tax burden. On the other hand, some companies suffered losses. In countries where loss carryforwards expire relatively quickly, these losses are not capitalized. As in previous years, this affected the effective tax expense by CHF 2.6 million (previous year: CHF 2.4 million). This corresponds to a tax rate of 34.5 %.

All in all, including the one-off effects, the Feintool Group generated net income of CHF 19.2 million (previous year: loss of CHF 3.9 million).

Total assets increased by CHF 7.4 million, equal to 1.1 %, to a total of CHF 684.4 million (previous year: CHF 677.1 million). The sharp decline in the value of the euro against the reporting currency at the end of the year had a significant impact on most items.

Operating net working capital increased by CHF 15.5 million to CHF 84.4 million (previous year: CHF 68.9 million), thus amounting to 14.3 % of sales (previous year: 14.0 %). In particular, the sharp rise in steel prices had a negative impact on this key figure. This is reflected in the increase in receivables by CHF 16.4 million and in the increase in inventories (+ CHF 22.7 million). The increase in trade payables (+ CHF 19.2 million) had a positive impact on net working capital.

Shareholder’s equity stood at CHF 338.4 million on December 31, 2021 (previous year: CHF 293.9 million). As a result, the equity ratio increased from 43.4 % to 49.4 %. The Statement of Changes in Equity shows that the net income from operations increased equity by CHF 19.2 million. Currency translation differences of CHF 6.8 million also had an impact. The revaluation of employee benefit obligations resulted in a positive effect of CHF 18.4 million. The other items had a small positive effect overall (CHF 0.1 million).

The number of employees (excluding trainees) decreased by 92 to 2 478 in the financial year (previous year: 2 570). In addition, 89 young people (previous year: 100) are undergoing vocational training at our companies. The System Parts segment had 2 307 employees, which corresponds to a decline of 78 employees. The Fineblanking Technology segment had 137 employees at the end of the year (-15 compared to the previous year). A total of 34 employees (+1) work in units that are not directly involved in the operating business. Feintool had 1 492 employees in Europe at the end of 2021, equal to 60.2 % of the total workforce, and 66 fewer than in the previous year. Of these, 331 were employed in Switzerland (previous year: 376). In the United States, the number of employees fell by 22 to 533 (equal to a decrease of 21.5 %), while in Asia the number decreased by 5 to 453 (equal to a decline of 18.3 %).